From theatre to perioperative: A brief history of early surgical nursing

Perioperative nursing is believed to be the first specialisation to arise in nursing and tracing its beginnings is an interesting exercise. The scientific advances made during the latter part of the 19th century resulted in increased numbers of patients in hospitals. Though previously shunned by all but the poorest, hospitals now provided an environment that was safer for surgery than a patient’s home, and needed skilled nurses as a result. Florence Nightingale established a school of nursing in England teaching ‘sanitary nursing’ and ensuring probationary nurses knew about antiseptics and disinfectants. Ms Nightingale stated that it was the duty of every nurse on surgical wards to prevent infection, and until the end of the 19th century the nurses who cared for surgical patients in the wards pre- and postoperatively also prepared for and assisted during surgery. However, in 1889 the first dedicated operating room nurse was employed in the USA, and thereafter the role of the theatre nurse became entrenched. That role has evolved significantly since then and continues to do so.

This work is licensed under a Creative Commons Attribution 4.0 License. 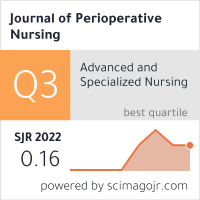